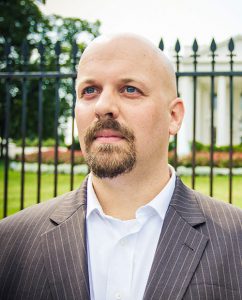 Presentation:
Pick your battles: Championing clean energy at the corporate and community levels

Google, Apple, and Facebook committed to powering the Cloud (the largest new source of electricity use) with 100% clean energy; in reaction, normally resistant utilities and regulators promptly rewrote energy rules to attract their business. McDonalds stopped buying beef from cows grazed on deforested land in order to cut carbon pollution; soon after, Brazil passed a moratorium on cattle ranching that drives deforestation. Join Phil Radford, former Executive Director of Greenpeace, to discuss the stories behind changes like these and how you, as an employee, citizen, executive, or advocate can pick your battles to transform companies in a way that will transform all of society.

Phil Radford is an American environmental, clean energy and democracy leader who, as the youngest Executive Director of Greenpeace USA, convinced Facebook, Apple and other high tech companies to shift to 100% clean energy. His work to change over 100 companies’ environmental practices was called “activism at its best” by The New York Times.

Radford engages audiences with a clear message: that the solution to climate change — clean energy — is winning in the market today. He believes this will take the leadership of students and corporate executives to accelerate the inevitable clean energy revolution.

Radford’s work has focused on the leadership role corporations can play in protecting the environment and human rights, creating groundbreaking partnerships to reduce the role of money in politics, promote universal voting rights for all Americans and supporting youth leadership, who he argues are the engine behind most major modern social change.

Radford served as a co-founder of the Democracy Initiative, a national coalition of major unions, environmental groups, civil rights and government reform organizations working for universal voter registration, to get money out of politics and to reform Senate rules. Ben Jealous, former president and CEO of the NAACP as well as co-founder of the Democracy Initiative, said: “Phil Radford is a modern movement building giant. He has built powerful diverse coalitions to bolster the fights for the environment and voting rights. In the process, he has shown himself to be unmatched in mobilizing everyday people to fund their movements directly.”

Phil Radford is a regular contributor to Huffington Post and has appeared on CNN, Fox News, NBC and ABC News. He has a degree from Washington University in St. Louis. In his inspiring speeches, Radford outlines the inevitable clean energy revolution that is happening at this moment, how business can and must lead in protecting the environment and the steps students and youth can take to make a better world come faster.